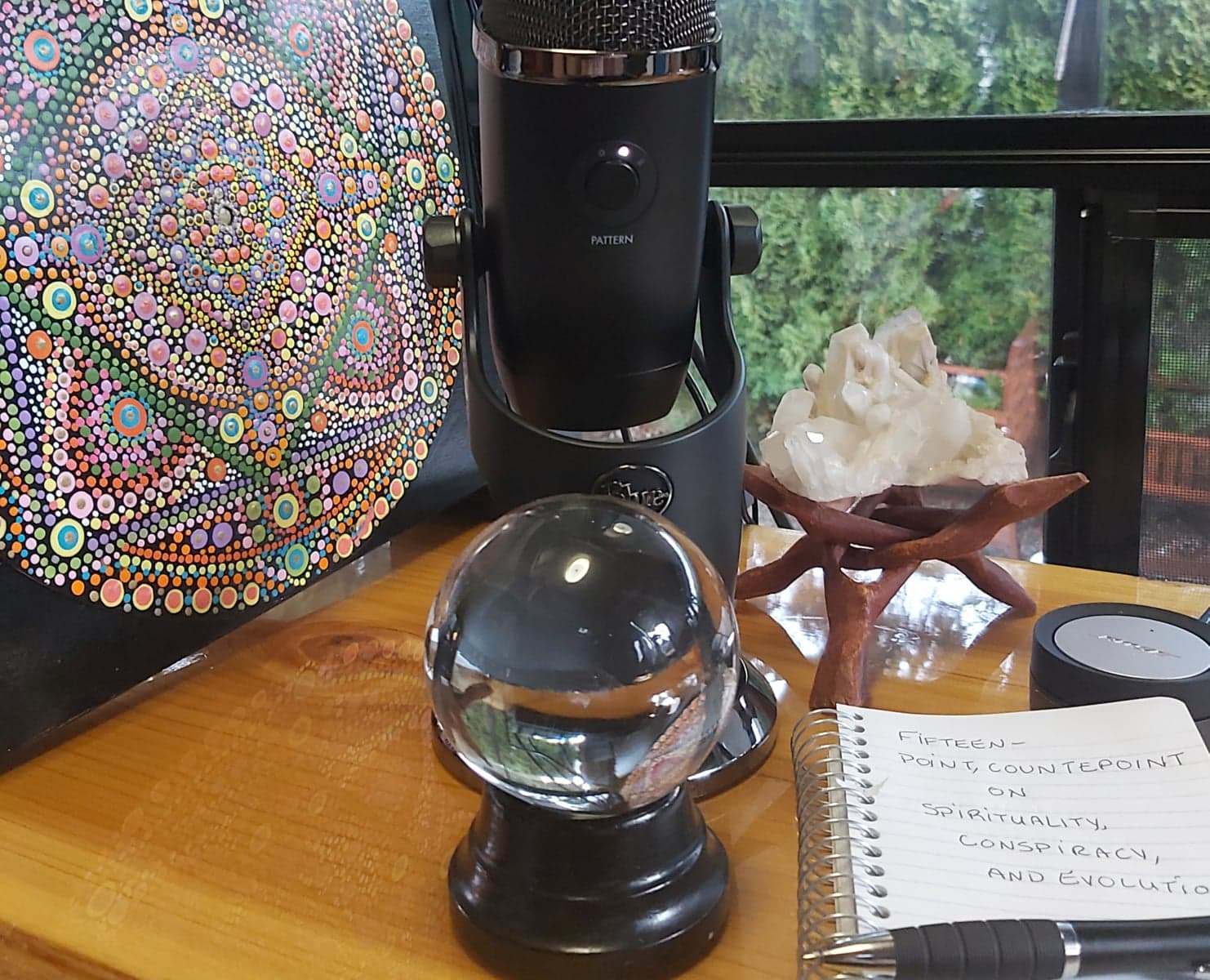 The guest for this podcast episode is Jessica Williams. After listening if you are interested in contacting Jessica for a Tarot card reading you can reach her at:

Here is a recent interview that Jessica did with Rogers TV in Newfoundland.

Here is an audio of Robert Bly, reading his book Iron John – parts one to four.

And finally a link to “A Gathering of Men.”

Hello, and welcome to “Fifteen.” A point counterpoint podcast, that last, approximately 15 minutes.   A podcast where we present two different points of view on the same topic. Today, we’re  discussing the healing of the masculine energy in the world. Or the masculine aspect. The guest today is Jessica Williams

Jessica comes at this from a more scholarly point of view than I do. I tend to be a little bit more, Woo- woo. She’s doing religious studies in MUN and she had just finished her thesis this year. She will be presenting the female side, how she envisions women being responsible for healing the masculine.

Then later on, after she’s finished, I myself, Reverend Lois Gueret will be presenting the masculine side. Meaning that I will do a counterpoint of men should be responsible for healing the masculine.

(Jessica Williams) So, I have been interested in the idea of women helping with the men for a while. Now, I’ve had quite a few male clients and a lot of the similarities that I see within the male clients, is the limited ability they have to be able to express their thoughts and emotions. Without feeling as though being a lesser than individual.

I find it interesting that I have men coming to me. Um, who is a very emotive person, to be able to express their feelings, and a lot of ways. And the number of men that I’ve seen cry in my lifetime has been huge. You know, so men do actually have a wide variety of emotions and feelings are very similar to women in a lot of ways.

And so, I was doing a lot of thinking in relation to how that, unfolded like that, you know, taking a look at the waves of feminism. Its kind of has double-edged sword. I mean, feminism has been great in regards to bringing women into leadership rules and seeing women break these glass ceilings that the before were so a physical barrier, so they couldn’t get through.

You don’t really need men. We are just, you know, we can do whatever we need to do with men, but men off to the side. All we need is their sperm as it were.

And then now we have the fourth wave feminism, which, you know, kind of stems out of that third wave feminism. They’re trying to focus on equality and bringing all these different things together, but at no point in time, have we ever actually focused in on men how to bring men into the fold with this changing dynamic?

Though we have these cultures of how men are supposed to respond. It is portrayed in popular culture. It is and if people will scoff, it’s like, Oh yeah, but that’s just the movies – well… Yeah. It may just be the movies, but movies and television shows. They do have a lot to do with how we move forward and how we perceive things as a society.

And they’re still in a balance where we see this very, what we consider now, toxic masculinity. James Dean, um, kind of what’s going on there.  You know, in this fifties and sixties, the women would be acting hysterically and the man would step up and smack her across the face to calm her down – because that’s what they needed to do.

So, while women are figuring out where we’d fit into the place and going, you know, we don’t want to be treated like that. We don’t really need you to be able to come in and support us, calm us down. We can calm ourselves down. We haven’t really told men how to treat us differently, with that expectation.

So, we will go out on dates and we still expect them to play. It’s less now than it was, but it’s still there. We expect them to open the door, pull up a chair, be the gentlemen, protect the girls, bring the flowers, prepare everything. There’s a lot that women still expect men to do from a relationship basis and then we put that out into the work world and then if men are wanting to still be able to have their thoughts and ideas brought forward, we’re now getting much more hesitant in being able to do that. So, as we’ve progressed along the line of this, this idea of feminism from the first wave of now into the fourth wave, we haven’t done a lot in holding our hands out, to help men figure out, you know, where they fit into this, this larger picture.

We’ve just been ‘deal with it’. This is the way we’re going to do it, and you just have to deal with it and cope with it. And as a result of that, now we’re seeing the in cells, the proud boys, the, you know, um, some more of those really strong negative connotations that go along with this, this masculinity to counter that, that femininity in a lot of ways. And it’s quite destructive.

So, to kind of sum thing’s up, women do need to do their part in bringing men together. To be able to provide healing as we do our healing in regards to this patriarchal, moving away from that idea.  We also need to bring men into the fold.

They are 50% of the population. They need to have a voice too.

Okay. So here’s the counterpoint.

(Rev. Lois Gueret) My point of view comes from the Robert Bly and Iron John book. Basically, due to hormones and the way that men interact with each other and the way that men raised their sons. I believe that the men need to take this into their own hands. Creating sacred space so that they can heal.

So, I don’t know if anybody really remembers Robert Bly and his Iron John movement. In popular culture, I remember being introduced to it, at first, by the TV show, Cheers and Frasier. There’s this one episode where they have been reading the book, Iron John. and Frasier took it to heart. He was very serious about it. And he goes running around the bar with scissors in his hand. And he’s saying out loud, look, I’m running with scissors. So, the predominant thought was that women would tell him to stop. And that you’re going to hurt yourself – scissors are sharp.

Whereas men would just sit back and continue to drink beer and figure, well, if he’s going to fall, he’ll learn. So that’s the world of men that women can’t understand. We want to be preventative. Whereas men see, ahh, go ahead and try it. See if you can do it. It’s not so much about safety, as we are, it’s about, let’s see if you can make another accomplishment.

The whole thing was based on the Iron John mythology, and that the masculine had to take the golden key away from the feminine and go out into the woods and experience the wild man.  The wild man that’s inside of every one of them. And they did this for a period of time so that they could come back and be socially acceptable.

So in the book, Iron John the mythologies about Iron John. And he has done something wrong that has gotten him imprisoned in a cell, in the cellar. And there’s a Prince, of course. And he’s being told, don’t talk to that fellow. That he is bad. So, the Prince can’t help himself. He wants to discover who this bad person is.

So he initiates contact and a conversation.  Iron John in the process convinces the prince that he needs to go upstairs and take the golden key for his jail cell, out from underneath of his mother’s pillow. So one day the Prince gets up, the nerve goes up there, steels that golden key, brings it back down to where the cell is and unlocks the door. The wild man, Iron John is set free. Iron John and this Prince go out into the wild. Uh, he runs away. And gets to experience what this wild – uncontrolled, untamed Iron John is like.

There’s a phase in the masculine, that if you’re meeting your own needs. If you want to become balanced, you enter the world of men. And at times, its very gritty and wild and uncultured. But it’s an initiation. And then if you go through that phase, the initiation. You can be brought back into a more socially acceptable version of being a man.

This is the aspect of the masculine side that women will never completely understand. So based on that – I guess it’s because of the way that I experienced my twenties and my early thirties. Was that the masculine needs to be in charge of this progression, these rights, these rituals.

If you have good and healthy examples of men in your life. This part’s easy to do. It’s easy to be able to have that more balanced aspect of your masculine.  Women do need to have awareness about and have their own masculine side, healthy. But it’s not predominant for who we are as women.

Obviously, because our hormones are different and those chemicals, those hormones control our brains and how we view the world.

Well, I hope you enjoyed our podcast. I’m going to be leaving links down below if you want it to be able to contact Jessica, she’s also a very talented tarot card reader. I will also be leaving some links down below to YouTube videos where Robert Bly is reading the book, Iron John. Um, he’s got it in four parts.

And I’ll also be leaving another link down below called “The Gathering of Men” with Robert Bly. And he’s being interviewed by Bill Moyers and this took place in 1990.

I want to encourage everyone to join in on the discussion. I’d like to hear feedback of our point counterpoint. And if you have anything to add, that would be great too.